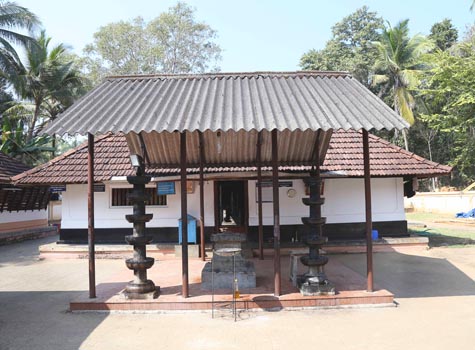 Situated in Keezhattur Village, coming under Perinthalmanna Taluk of Malappuram District, Kerala, Sree Muthukurussikkavu Ayyappa Temple is one of the most ancient Sastha Temples in the old Valluvanad Taluk. The temple is believed to be old by about 1700 years or more, as per the “Devaprasnas” conducted in the temple.
It is believed that in olden times, the place where the temple stands now was a desolate jungle area and a local king was residing about 1 km from the place. The diety was worshipped by that royal family for long time then. The place is still known as “Kovilakathody”, meaning the compound of Kovilakam. However, clashes between the local kings and royal families led to the ruin of the local kingdom and the temple was abandoned and later demolished and lost in oblivion.
When years passed, once a cherumi, treated as a lower cast woman that time, happened to sharpen her sickle on a rock half hidden in weeds and shrubs. Suddenly blood started oozing from the rock and she shreiked out of fear seeing the flow of blood from the rock. A thandan – an eezhava youth – who was extracting toddy atop a plamirah tree, hearing the shrieks, immediately climbed down and raced towards the place of origin of the shriek and found that a woman was lying unconscious near the shrubs grown nearby. He cleared the shrubs and weeds and found that the origin of blood was from a small rock projected from the ground. He informed the matter to the people nearby and those gathered there in no time approached Mannarmala Kovilakam about 6 kms away, who owned the landed property that time.
The Thampuran – local king – conducted a prasna vichara (astrological enquiring) and came to know that the Sastha (Ayyappan) had originated on the rock as “Swayambhoo” (coming to the fore by oneself). He then constructed the temple and entrusted the running of the temple with Kondiparambath Mudakkappatta Nayar family and handed over some landed properties to that family to meet the expenses of daily rituals of the temple. Mangalath Namboodiri was also entrusted to help running the temple. Prominent nair families of the place that time like Pariyarath Panicker, Maniyaneeri Nair, Madangolli Panicker were also arranged to help them.
Now the temple is run under the heriditory trusteeship of Mundakkappatta Nair family with the help of a local temple committee. Panayur Namboodiri is the Tantri of the temple.
The temple is about 12 kms north-east of Perinthalmanna town and is about 2 kms east of Poonthanam Illam and Poonthanam Mahavishnu Temple. Buses are available from Perinthalmanna town to the temple at certain times. One can also reach the temple by getting down at Akkaparamba or Pathonpathu of Perinthalmanna – Nilambur route and making use of autorikshaw plying there.